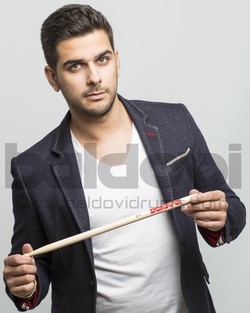 When we are talking about Javier Baldoví, we are introducing a new concept in the electronic percussion world. This young, but experienced percussionist and dj, shows an amazing fusion of the tribal rhythms with the new age music.

Born in Valencia in 1988, he has always been into the percussion world, “I always wanted a drum kit as a present at Christmas’ Eve and my biggest satisfaction was to see that my dream was converted into reality” he says and laughs.

When he was eight years old, he took the first percussion course and started to play as a member of a Valencian folk music band. Some additional courses about the different kinds of percussion in the world were giving him a global view in after years. Thus, his music was getting different ways of understanding the rhythm. After some collaborations with latin jazz, folk, samba, rock, and so on, groups, he discovered his enormous capacity of improvisation. According what he says, “the improvisation in jazz music, different to every kind of music, gave me the opportunity to express myself freely while playing”.

Subsequently, he discovered the perfect complement to the style of improvisation that he was developing: electronic music. When he was just 17, he enjoyed his first live house music performance at Albades Night Club (Muro de Alcoy, Alicante, Spain) with Más Radio, and then, he started an upward career playing at some of the most important clubs in Spain. He shared night sessions with renowned international DJs and Live musicians.

This percussionist, very concerned on his vocation, aspires to be a great revelation. Currently, Javier has so many projects on mind.He was sponsored by Rg512 París and collaborated with other important promoters ,and marks (Brian Cross World tour 2008, Coronita Spain tour 2010, Myclub room Privilege Ibiza 2011, People Dubai 2012, Legendario tour 2011, Open tenis Valencia 2010, Formula One Amstel Heineken 2010...) DJs, radios with high international projection. In the meantime, he continues giving lots of fun to his people on every live show and produce a new singles.