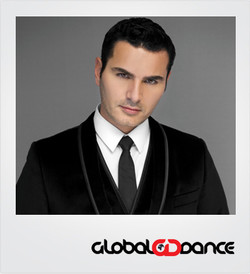 DJ producer David Vendetta had been hanging out for a while with the sound trendsetters when he found a mentor in Roger Sanchez.

He kickstarted his career in 1998 and went truly international in 2006 with "Love To Love You Baby" and "Unidos Para La Musica" followed by the hit album « Rendez-Vous » (nearly 500,000 albums and singles sold).
When you look into his background, you will find you a self-made man, French born but identifying more with his Italian side, someone who made the move from a conventional life to one of passion: deejaying on a professional level.

Although his popularity as an international star DJ gives him the opportunity to entertain the most exclusive crowds, his choice is to remain an accessible artist, remaining faithful to his values and objective: sharing the thrill and pure joy of a signature club-electro-house sound.

David is a regular at legendary nightclubs like Le Queen in Paris, The Venue in Athens, Bora Bora in Sousse, Dreamers in Marbella...

Today, he introduces his new album : « Vendetta »
In this intense blend, David reinvents himself and the music in the process, merging the influences from his travels, encounters and experiences into a more accomplished and diverse sound that becomes a club spirit junction.

This new alchemy has David rubbing shoulders with top 80 charts remixers; such as Felix Da Housecat, Syke ‘N’ Sugarstarr, Harry Choo Choo Romero, Chris Lake, D.O.N.S, Kurd Maverick… a shining new perspective on his musical beat.
Mainstream radios have already flocked to what promises to be a rocketed-to-success album : David has signed and licensed his second studio album to over 60 countries!

Since emerging on the House Music scene several years back, David Vendetta has kept himself busy focusing on every aspect of the industry. 2011 stands to be a year of new tracks and general artistic development, as David not only furthers the David Vendetta image, but also starts work on several collaborations.??He has already started this year with a release featuring the iconic London Beat 'I've Been Thinking About U', a great Vocal Mix with singer Sylvia Tosun, titled “World Keeps Turning” which was 6th at TOP 100 Progressive House on Beatport the first week of release and #5 on Billboard Hot Dance Club Play Chart, also included on new Amnesia-ibiza Dancefloor Hit 2011 mixed by David Vendetta?
Then there’s the collaborations that he is working on with several female vocalists, including Ukrainian singer Oxana and Laura V, the voice who brought us Chris Lake’s universal Dance Music hit, “Changes”.?? Finally, David has signed and licensed his second studio album to over 60 countries. He is in no shortage of international gigs, so catch him at a city near you! Being a jack-of-all-musical trades isn’t easy, but Vendetta manages to find the perfect balance between producing and gigging, making him a true House Music star.