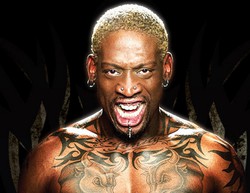 Dennis Rodman is one of the greatest rebounders ever to play professional basketball. His rebounding exploits have drawn comparisons with such legends as Wilt Chamberlain, Moses Malone, and Bill Russell, all of whom were taller and heavier. Sports Illustrated once called Rodman "a sort of basketball genius." A dedicated analyst of the game and a tenacious defender, Rodman led the National Basketball Association (NBA) in rebounding for four consecutive years and helped lead his teams to five NBA championships. As his career went on, however, Rodman drew ever more attention for his off-court antics. With his rainbow-colored hair and multiple tattoos, his penchant for conducting interviews in gay bars, and tumultuous romances with the singer Madonna and the actress Carmen Electra, Rodman landed headlines far outside the sports pages.

Rodman revels in the outsider image. The hair, the tattoos, the numerous body piercing's, and the episodes of cross-dressing are all the product of a man who is as much entertainer as athlete. "I tried something bold," Rodman explained in Playboy. "I created something that everyone has been afraid of ... the Dennis Rodman I was born to be." However flamboyant his behavior might be, Rodman offers no apologies. He feels that he is fulfilling his mission in the NBA as well--or better--than anyone. "I don't like people to get inside Dennis Rodman," he admitted in the Atlanta Journal. "But once I get on the court, I'm just taking the 22,000 fans that are in the stands and putting them inside me. I like to see people excited and happy, and when they leave the arena they say, 'God, that was a great game.'"
Renounced by Mother

Dennis Keith Rodman was born on May 13, 1961, in Trenton, New Jersey, the son of Philander and Shirley Rodman. When he was just three years old, his father--an Air Force enlistee--deserted the family, leaving Dennis and his two younger sisters without a father figure. Despite his success in the NBA, Rodman has not seen his father in 25 years. No one is more surprised by Rodman's success than Rodman himself. "I'm something I shouldn't have been," he told the St. Louis Post-Dispatch. "I should be an average Joe Blow, nine to five." Rodman says this because as a child he was frail and shy, often taking the brunt of beatings by his bigger, more aggressive schoolmates.

Rodman was only five-foot-eleven during high school. He did not even make the varsity basketball team at the Dallas, Texas high school he attended. After graduating from high school he drifted through a series of jobs, including serving as a janitor at the Dallas-Fort Worth Airport. According to Mark Seal in Playboy, the part-time airport job led Rodman into trouble: "On a dare, he stuck his broom handle through a gift shop grate and stole 15 watches. He was arrested, jailed for a night, and released after he told the cops where the watches were." No charges were ever filed in the incident, but it added to the growing strain between Rodman and his mother.

Shortly after the incident with the watches, Rodman's mother issued him an ultimatum: he was to go to college, enlist in the armed services, or get another job. Rodman ignored her. Exasperated, she packed his bags and kicked him out.
Rescued by Basketball

Rescue came in the form of a phenomenal growth spurt. Rodman grew almost a foot in a single year, topping out at six-foot-eight. After a year at Cooke County Junior College in Dallas, he won a basketball scholarship to Southeastern Oklahoma State University. He arrived there, shy and uncertain about his skills, in 1983.

At a basketball camp that Rodman helped to coach, he met a young boy named Bryne Rich. Bryne was suffering deeply from the consequences of an accident that had occurred while he was hunting--his gun had discharged while he was reloading, killing his best friend. Rodman helped Bryne talk through his pain, and in return Bryne introduced Rodman to the Rich family, who practically adopted the soft-spoken college player. Rodman moved in with the Rich family, who offered emotional support and encouragement as his basketball career caught fire.

As a college junior and senior Rodman led the National Association of Intercollegiate Athletics (NAIA) in rebounding, with 16.1 per game in 1985 and 17.8 in 1986. He was named an All-American as a senior and was chosen in the second round of the 1986 NBA draft by the Detroit Pistons. Rodman joined the Pistons for the 1986-87 season as a forward, finding a congenial atmosphere with coach Chuck Daly and a no-holds-barred group of fellow players who would come to be known as the "Bad Boys." Professionally, Rodman became a force to be reckoned with. The Pistons won back-to-back national championships in 1989 and 1990, taking their "Bad Boy" image to a worldwide audience. Rodman established himself as a solid rebounder and important defensive cog in the Pistons lineup, earning NBA Defensive Player of the Year honors in both 1990 and 1991. He had a good relationship with his teammates and coach Daly, and by all reports he was infuriated when some of his friends got traded and Daly left the team. "Dennis kind of grew up with us," Daly explained in USA Today. "The Pistons were Dennis's first professional family, and he really liked what the team stood for.... It was a family to him, and when it disintegrated around him, it was tough for him to deal with."
Became Rebounder for Hire

In 1993 Rodman signed a three-year contract with the San Antonio Spurs, bringing him home to Texas. There he helped the Spurs to advance to the playoffs by leading the league in rebounding in 1993, 1994, and 1995 (he had been top rebounder with the Pistons in 1992 as well). It was also in San Antonio that Rodman began coloring his hair the many shades that have made him a star beyond the bounds of basketball. Rodman put himself in the hands of hairdresser David Chapa, who created the classic Rodman look by first applying peroxide until the player's hair turned white, then coloring it with bright hair color in shades of Rodman's choosing. On occasion Rodman and Chapa collaborated on designs that are colored onto the crown of Rodman's head. The painful process took up to three hours and carried the threat of future baldness. Rodman suggested that if his hair falls out, he would just tattoo his head.

With the Spurs, Rodman established himself as a rebounding specialist on a par with the likes of Bill Russell and Wilt Chamberlain--both of whom were centers, far taller and heavier than Rodman. In fact, at six-foot-eight and 215 pounds, Rodman is definitely short and slight for his specialty. "I'm surprised that I can even get to the ball compared to most guys who are 6-10 and 7 feet tall," he told the Chicago Tribune. "Especially when I've got guys grabbing me and holding me and doing all kinds of things to keep me away from the ball. They don't even know me well enough to be doing some of the things they do." Rodman compensated for his relative lack of stature by analyzing the behavior of the basketball as it arches toward the hoop and then caroms off in various directions. He can often anticipate how a ball will behave when it fails to fall through the basket--and he responds accordingly. "People think I just go get the damn ball, because they don't take the time to really look at what I do," he said in Sports Illustrated. "Rebounding isn't brain surgery, but there's more to it than being able to jump higher than the next guy. A lot of work is done before you ever even jump."

It was during his tenure with the Spurs that Rodman met singer-actress Madonna on a photo shoot. They began a highly-publicized courtship that added spice to the tabloids for months. While Rodman refused to comment on the relationship, his Spurs teammate Jack Haley--one of his few close friends--said that Madonna was very serious about Rodman. "I went out with Dennis and Madonna several times," Haley told the Detroit News. "It's not rumor. It's true. I was there. She was dead serious. She wanted Dennis Rodman to marry her. She asked Dennis several times to marry her. I was there, I heard it with my own ears. She wanted to have a baby." Haley added that Rodman was more cautious and unwilling to enter into a serious commitment after such a short courtship. After several months, the pair split up.
Played with the Bulls and Beyond

When the Spurs failed to make the championship finals in the 1994-95 season, Rodman's image as a nonconformist became an issue. During contract renegotiations, Rodman was traded to the Chicago Bulls--a move that he welcomed, since the Bulls were the dominant team of the 1990s. With the Bulls, Rodman continued his outrageous behavior. He appeared at Bulls games with green hair, red hair surrounding a black Bulls emblem, and canary yellow hair. In his first season with the Bulls he drew a two-week suspension after head-butting a referee and was suspended for 11 games after kicking a courtside TV photographer. And yet somehow, he helped the team win. "My sole aim ...," Rodman told the Associate Press, "will be to help bring the NBA championship back home to Chicago." He continued improving as a rebounder, learning the shooting styles of Bulls stars Michael Jordan and Scottie Pippen so he could better react to their missed shots. Though his teammates sometimes disliked his attention-grabbing behavior, Rodman helped the team win. In fact, the Bulls won the NBA title three years in a row, in 1996, 1997, and 1998.

Playing with the championship Bulls put Rodman in the spotlight, and he adored the attention. In 1996 he published his autobiography, Bad As I Wanna Be, which spent 20 weeks on the New York Times bestseller list. In the book Rodman revealed his secret longing to be a woman. Rodman showed up at book signings riding a Harley Davidson motorcycle and wearing women's clothes. Rodman's personal behavior drew national headlines, briefly marrying former Baywatch star Carmen Electra, starring in action films like 1997's Double Team, hosting an MTV program Dennis Rodman's World Tour '96, or appearing in World Championship Wrestling matches. No act was too outrageous for Rodman, no stage too big. Following the 1998 season the Bulls set out to rebuild, and Rodman was released. Though most NBA players were ready to retire by their late 30s, Rodman remained willing to offer a team his prodigious rebounding skills if only they would tolerate his increasingly outrageous behavior. For a brief period, the Los Angeles Lakers were willing to give Rodman a try. He joined the team for 23 games in 1999, at one point spurring them to 11 straight wins. Then Rodman was fired, and didn't play again until the next season, when he signed with the Dallas Mavericks. Rodman played just 12 games for the Mavs in 2000 before being released from the team ending his NBA career. To top off a great career Dennis Rodman was named part of the Naismith Memorial Basketball Hall of Fame's Class of 2011. Today Dennis Rodman is represented by Prince Marketing Group and he continues to make personal appearances all over the world just being Dennis Rodman !