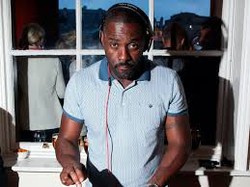 No stranger to music, Driis (Idris Elba) has produced and performed under various monikers over the years. In 2006, he released the critically acclaimed Big Man EP, followed this with tracks featured on Prom Night and Tyler Perry’s Madea Goes to Jail soundtrack, and then in 2008 Driis received the ultimate industry co-sign when he was selected out of hundreds to produce the intro for Jay Z’s seminal American Gangster LP.

With this under his belt, Driis set task to define a sound of his own. He holed up in the lab with a variety of producers: 9th Wonder, Vitamin D, and Klasix , to name a few. The outcome — ‘King amongst Kings’ — A fusion of sounds that reflect Driis’ eclectic influences: rare groove hip-hop and lovers rock beats under vocals that are uniquely Driis.

Excited at the prospect of sharing his new music, he is keen to get on the road. And it’s at this exciting point in his musical journey that Hevlar Records invites you along for the ride. So buckle up, sit back and open your mind to the sounds of Driis: formidable DJ, talented producer, emotive lyricist, and intuitive vocalist. Coming to you in the days, weeks, months, years to come.