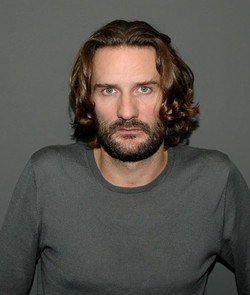 Frédéric Beigbeder is a French writer and literary critic. He won the Prix Interallié in 2003 for his novel Windows on the World and the Prix Renaudot in 2009 for his book Un roman français. He is also the creator of the Flore and Sade Awards.

Beigbeder was born into a privileged family in Neuilly-sur-Seine, Hauts-de-Seine. His mother, Christine de Chasteigner, is a translator of mawkish novels (Barbara Cartland et al.); his brother is Charles Beigbeder, a businessman. He studied at the Lycée Montaigne and Louis-le-Grand, and later at the Institut d'Etudes Politiques de Paris. Upon graduation at the age of 24, he began work as a copywriter in Young & Rubicam, then as an author, broadcaster, publisher, and dilettante.

In 1994, Beigbeder founded the "Prix de Flore", which takes its name from the famous and plush Café de Flore in Saint-Germain-des-Prés. The prize is awarded annually to a promising young French author. Vincent Ravalec, Jacques A. Bertrand, Michel Houellebecq are among those who have won the prize. In 2004, the tenth anniversary of the prize, it was awarded to the only American to ever receive it, Bruce Benderson. Three of Beigbeder's novels, 99 Francs, "L’amour dure trois ans" and Windows on the World, are being adapted for the cinema. The film of Windows on the World will be directed by the French/English director Max Pugh.

In 2005, he was, with others authors such as Alain Decaux, Richard Millet and Jean-Pierre Thiollet, one of the Beirut Book Fair's guests in the Beirut International Exhibition & Leisure Center, commonly (BIEL).

He worked for a few years as an editor for Flammarion. He left Flammarion in 2006.

His novel Un roman français was awarded the Prix Renaudot in November 2009.

He writes columns in Le Figaro Magazine since 2010.