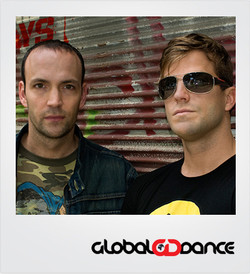 In 2004, the Global Deejays were formed, consisting of Dj Taylor and Dj Flow. The name suggest both their common passion for djing and dance music, as well as their multinational origins (the US, Denmark, Holland and Austria).Their first single “The Sound Of San Francisco” reached the Top 10 place in the charts in nearly every country around the world and cemented them in the international dance scene.

With their second single “What A Feeling (Flashdance)” they were even able to top the success of the first in numerous countries. In summer 2005 they released the first Album called “Network”, which is arranged with radio station Ids and salutes, making it sound like a live radio broadcast, and showing their wide music capabilites. It also includes the third single “The Stars on 45”. Following the success of the singles and the album they were awarded various international awards and music prizes. Mikkel left the group at the end of 2006.

In the beginning of 2007 they released the Single “Get up! (before the night is over)” which they produced together with Technotronic. With this track the reached the top of the dj- and dancecharts one more time, and had successful releases all over the world. They followed up their success in 2008 with the track “Everybody´s free” – in cooperatin with the 80ties Dancequeen Rozalla. In Russia and the CIS counties they additionally released a remake of the track “Zelenoglazoe Taxi” and reached number ONE positions in various charts as well as heavy rotation on almost all radiostations. The track is also featured in the worldwide bestseller game “GTA 4”.

Early 2009 they had a Top 10 Hit in Australia with “Everybody´s Free 2009”. The song was featured as the signation of the TV show “So you think you can dance”. The track was re-released worldwide with new mixes and a great videoclip.
In 2010 they launched a cooperation project with well known singer, Ida Corr (“Let Me Think About It”) and released the single, “My Friend” that hit #1 on the UK dance charts! In 2011, they proved their status as worldclass producers with the track “Bring it back”, which reached the top of European charts, peaking at #8 on the US Billboard Dance Charts! In France they had a Top 10 sales charts hit with „Hardcore Vibes“, which was also #4 on the national airplay charts, early 2012.