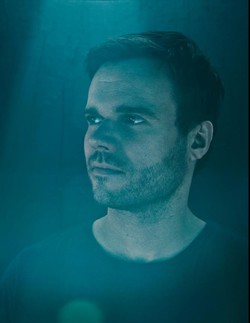 Tensnake, aka German DJ and producer Marco Niemerski, made his name with the huge 2010 dancefloor smash hit ‘Coma Cat’, and since then has been in ever increasing demand. Seemingly effortlessly managing the elusive feat of marrying classic disco and house influences to a contemporary sound, Marco is in that very rare position where his music appeals equally to the biggest dancefloors, from Ibiza and Miami, and real chin-stroking aficionados. All of which has gained him a solid reputation as a producer’s producer. His music effortlessly transcends genres, and the release of his eagerly anticipated debut album Glow looks set to cement his reputation as a major talent.

Born in Hamburg in 1975, Marco grew up listening to disco, soul, boogie, funk and the finer cuts of 80s pop, from Prince, to the more Balearic tracks from Simple Minds to, er, Prefab Sprout. His older brother also introduced him to other influences like freestyle and boogie to Italo-pop. As he grew older he went through a Mod-period before finding and embracing more dancefloorinspired influences from Larry Levan to Junior Boys Own, Romanthony to Masters of Work. With such a diverse set of influences, it’s no surprise Marco’s own music has already shown more depth than most artists manage to achieve in a lifetime.

After starting the Mirau label with friends in 2005, Marco’s first record was ‘Around The House’, which he felt was “a lucky strike” at the time, but still sounds fresh six years on. The Mirau motto is ‘Not mass but class’ and over the years it has steadily grown into an international label, and released their first compilation album last year, as well as Erdbeerschnitzel’s excellent album “Tender Leaf’.

It was the aforementioned all-conquering ‘Coma Cat’, which first made Marco’s name. “I knew as soon I wrote it that I had something special,” says Marco, “but I never expected it to be so big, or last so long”. But although ‘Coma Cat’ may have been the breakthrough, the 80s tinged, more cinematic and laidback ‘Congolal’, and ‘Mainline’, Marco’s 2012 collaboration with UK vocalist Syron, and storming remixes for everyone from Aloe Blacc and Friendly Fires to Lana Del Ray clearly showed the depth of Marco’s range. Then there was a sublime mix of ‘Ritual Union’ for Little DRagon, a beautiful downtempo piece which was so good that vocalist Yukimi Nagano herself sang a show-stopping live version of the song with Marco in Miami last year.

It was a sign of things to come. The first single released from his forthcoming debut album, the smooth, down tempo ‘58BPM’ with Fiora surprised a few people when it was released. “That was deliberate decision,” says Marco, “I wanted to make a statement with the first single and surprise people.” With shades of Prince and a brilliant remix from Mano Le Tough, it was another reminder that it was proving impossible to corner this Snake.

When he first appeared on the scene his early releases were seen as a welcome antidote to the omnipresent minimal house scene of the time. If there’s anything Marco is rallying against with Glow, it’s what he sees as the sidelining of the songwriting in the desperation to create big brash dancefloor moments, in the wake of the rise of EDM. “I feel like people have forgotten the art of songwriting,” explains Marco, “which is all important”.

It will come as no surprise to fans of Marco’s mixes, which always take listeners on a journey, that Glow is an album that stands alone as a complete, cohesive piece of work, rather than a collection of dancefloor tracks collated on one CD. It’s one of those rare beasts, a dance music album that makes total sense if you sit down and listen to it at home from start to finish.

Glow features collaborations with Fiora, Stuart Price, Jamie Liddell, MNEK (British singer Uzoechi Osisioma Emenike), Jeremy Glenn, Gabriel Stebbing (Nightworks)… oh, and the mighty Nile Rodgers from Chic, who plays on two tracks.
There’s been a million misinformed column inches written about the return of disco over the past couple of years, but for Marco, disco never went away, it’s been an ever-present influence in his record collection and music, so for Marco collaborating with Nile Rodgers was a dream.

“I couldn’t believe he was so grounded,” says Marco. “I sent him a message on Facebook, and didn’t really expect a reply, but he replied himself 20 minutes later and he said he knew my music. I sent him the music and he called me and said, ‘Would you mind if I was just your session musician on this track’ which was amazing.”

Marco will also be going out and showcasing the album this autumn, which promises to be a very special show.

All of which looks like hammering home that 2013 is the year of the snake.